"Rain-Out" event, Scottsboro, Al. Dec. 10, 2012. (Please see update below as to radionuclide identification.) A light to moderate morning rain brought with it radiation. Test as demonstrated reveals Gamma & Beta Radiation with a very short half life. Wind was out of the west, northwest; temperature 55℉. The "rainout" event video referenced within this video which demonstrated a radiation Counts Per Minute of 1500+ on Nov.12, 2012 (Veterans Day) may be found at: http://youtu.be/7x5HtI02AKE

Radon daughters: the concentration of radon gas and its decay products depends greatly on temperature and weather patterns. When the air is cooler, or when there is an inversion layer "holding down" air near the ground, there can be a higher concentration of radon gas and its decay products -- especially Lead-214 and Bismuth-214, which are strong gamma and beta emitters and are quite radioactive. Other weather conditions can cause large variations as well, especially rain. Rain washes the radon progeny out of the air. So when it rains, there should generally be a short spike in the gamma and beta counts followed by a period of lower counts. http://www.radonserv.com/message.asp?...

Posted by MATRR.org Events at 6:27 PM 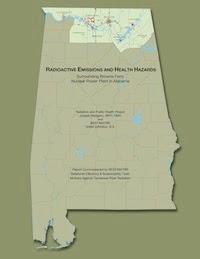 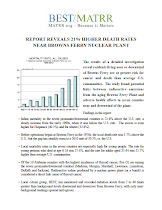